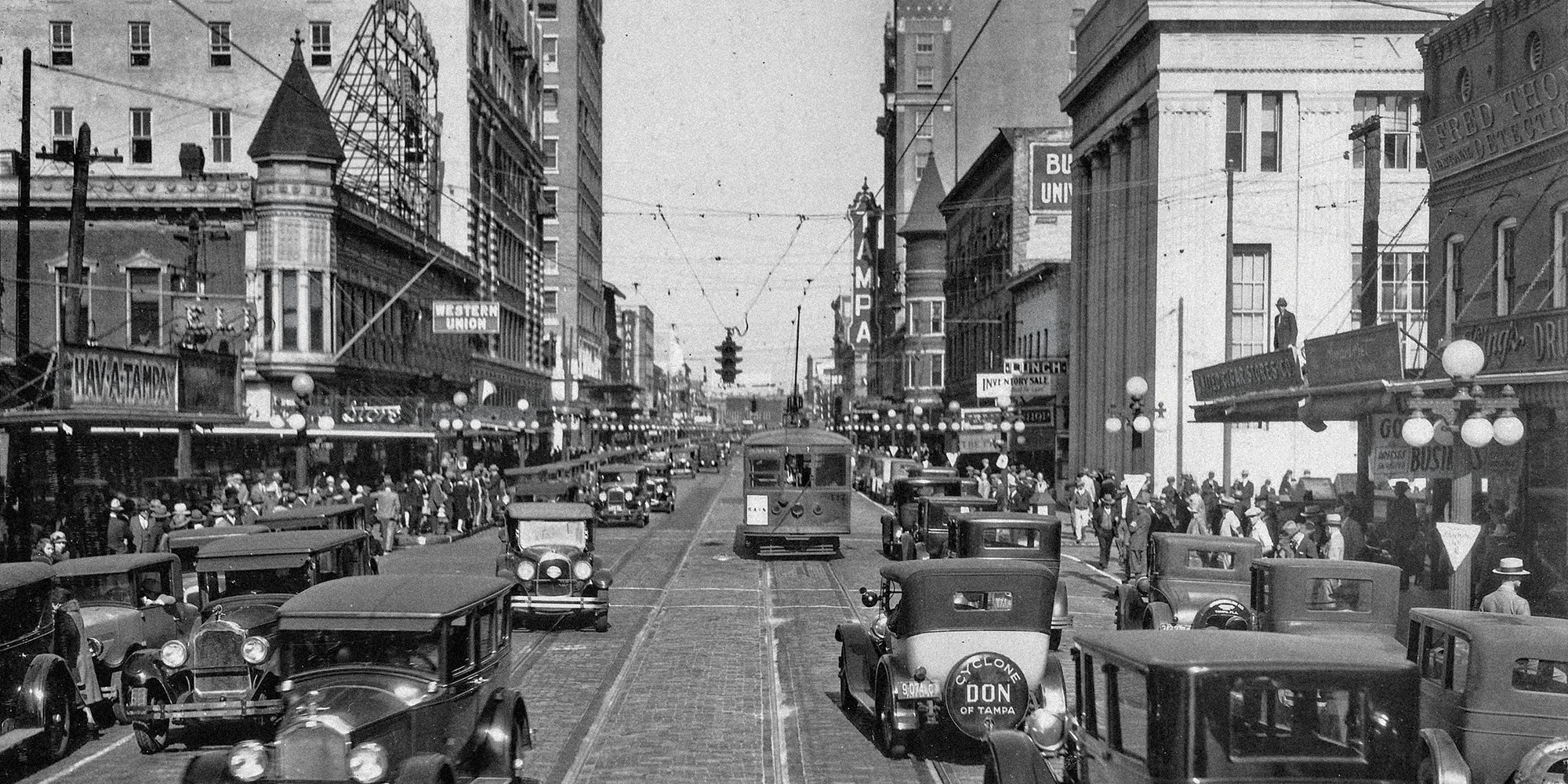 Bloom on Franklin is designed with purpose.

Historic Franklin street was the first paved street in downtown Tampa. The street used to fed by the neighborhood of Tampa Heights. Prior to 1945, Tampa had one of the most well-designed public transportation systems in the country, with a robust street-car line. In the mid-1940s, automobile giants, Standard Oil, and the rubber industry paid off subsidies Teco to remove the streetcar lines from cities all over the United States, and of course, the City of Tampa was no exception. Subsequently, the interstate system was planned, and constructed through some of the most diverse neighborhoods across the United States, in the 1960s. Tampa Heights and North Franklin Street suffered much of the damage from being split by the construction of the interstate. The Central Avenue Black-Owned Business District was directly where the downtown interchange sits today.

To learn about the evolution of Franklin Street, see these two articles:

The Evolution of Franklin Street by Miguel Nieves.

Historic Franklin Street, as a business corridor suffered since the early 1950s. Today, there are a lot of surface lots, and abandoned historical buildings.

Bloom on Franklin is designed to work with the neighborhood associations, Tampa Heights Civic Association, and the Downtown River Arts Neighborhood Association, as well as the City of Tampa, Tampa Downtown Partnership and Heights Union, a development by SoHo Capital - to move forward solutions for walkability, community, and placemaking throughout the neighborhoods that serviced the business corridors in the area. Bloom on Franklin is a monthly ceremony of arts and entertainmnet along Historic Franklin Street.

Bloom on Franklin is an event that takes place every fourth Friday, starting at 7pm and going until 11pm (sometimes later) the event is a nice addition to Downtown Tampa’s Fourth Fridays. With the support of our partners, we are planning to expand throughout the length of Franklin Street, from Palm Avenue to East Jackson Street.

Bloom started off as a way to safely experience outdoor art and entertainment coming off of the uncertainty of the Covid-19 pandemic. The first event featured a floral installation by Illsol, and music by Ari-Chi, Shelby Sol, Jinx, Mike Mass, Dennis Amadeus of GrowHouse, and others. Bloom has since grown to multiple locations along the Yellow Brick Row.

Celebrate, inspire, and grow. Bloom on Franklin is a monthly ceremony of arts and culture, but it is also an opportunity for people to come together in healing, with many future experiences meant to focus on spiritual and mental health, as well as immersive experiences that provide the opportunity for memories to be made for visitors of all ages.